The ABCs of First Aid

So, there you are with your kids, waiting in line to see the latest movie. You’ve waited a while and people are getting restless. Suddenly the parent in front of you in the line collapses. You have your first aid training, you know you have to do something, but what? Your mind flips back to the first aid class, you remember something to do with the alphabet and a doctor. That’s right – the instructor said it was as easy as Dr. ABC. So your first aid training takes over and you act…..

The ABCs of First Aid

Let’s spell out ‘The ABC’s of First Aid’ and then we can talk about them. Now before we do, let’s make it clear that these are the ABCs of First Aid, not of ACLS or other advanced courses, even if they are the same in places. If you did a short (8 hr, 1 day) first aid course as many people do, you probably stopped at C or D. Even with further first aid training you might not have discussed anything more about this easy way to remember what to do, so here goes…

Would you like a PDF copy of this article (and two others from us) in your mailbox?

If you’ve ever had any first aid training, you’ll know the need to check for danger. It’s the first thing we tell you on every first aid course in every situation. First of all, anything that has happened to the casualty could happen to you as well; Then you’re injured and who comes to help the two of you? So as the First Aid Attendant you have to keep yourself safe. You also need to think about any ongoing danger to the casualty. Is there anything happening which makes it unsafe for them to be where they are?
In our example, what happened to the other parent? Did you see them get hit, if so are you next? Are there fumes, or gas or smoke coming out of the cinema? Or is it less dramatic? Have they got some sort of medical condition that isn’t a danger to you at all? Depending on your findings, you might have to do something to remove the danger, or if there’s no other choice, you might have to move the person*. After you’ve considered and dealt with the dangers, you can move on to Response.

Theirs, not yours! Now that you’re safe to be there, you need to find out if the person is so unwell they can’t even respond to you. We do this in two ways – check their response to voice and to touch. If you’re arriving as the First Aid Attendant, or even if you’re just running over to someone collapsed in the street, you can do the first part as you approach (yes, even as you check for dangers). In fact it’s pretty natural to be shouting ‘Are you OK?’ and ‘What’s wrong?’ and expecting a response. If you get a response from the person, great!
What sort of response? At this stage anything is good! If they’re talking to you and saying everything is OK, then your job is pretty much done, but even turning to look at you yelling is a good sign.
If there’s no response, you need to get more specific. Kneel down next to them (I’m assuming here that they’ve collapsed) and shout in each ear in turn. Put your hands on their shoulders and shake their shoulders. ‘Hands on’ is because they may have a hearing problem. Now while we say ‘shake and shout’ there are common sense limitations. Don’t shake a baby for example – do something else which would make them respond. Tickle their toes? Flick their eye-lashes (and that works well for everyone, by the way)? Rub their hands? Something that would get you a response normally.
If you are dealing with kids, any response is good! With older kids, ‘Trying not to laugh’ is just fine too. If there’s no response, you’re about to call for help, so get a response if you can……
Still no response despite your best efforts? Then shout for help . You now have an unresponsive casualty and you need to get the ambulance/medical services on the way. If you can shout someone to come over and help you, you can send them to make the call.

Next up is the airway. This is the system of body parts that allows air to travel from ‘all around us’ into the lungs. We all need an airway to be able to breathe. As the First Aid Attendant you have to make sure the person has one.
OK, but what does that mean? It means we need to deal with anything that might stop a person from being able to breathe. It could be obvious – rescue them from the water (safely!), remove the plastic bag from the child’s head, cut the rope that’s caught round their neck… but it could be less obvious too.
First of all, take a quick look in the person’s mouth. Especially with children, there’s a risk that candy, toys and other things may be in there (see these notes about choking). Anything you can obviously see can be removed, but don’t go hunting.
Next (with a few exceptions*) you need to do the head-tilt & chin-lift. This procedure makes sure that the person’s tongue is not blocking the back of their throat. When unconscious and on their back, a person’s tongue will relax and naturally slide backwards. Unfortunately this will stop them breathing. As the First Aid Attendant, you need to deal with that. It’s a practical skill you should find a way to see & then practice – our courses are great for this! 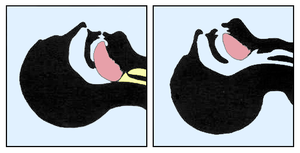 So far so good. Now you need to find out if they’re breathing.

No. What you did in ‘airway’ was make sure they could breathe if they were able to. Now you need to find out if they’re able to.
Put your face next to theirs so that your cheek is near their nose & mouth and look down towards their toes. Go ahead, they’re unconscious, they won’t mind.
You should be able to hear their breathing, feel the breath on your cheek and see the chest or abdomen rise and fall. Under ideal conditions, you’ll get all of that. If not, any one point will do – if it’s too noisy to hear the breathing you should still feel and see it, etc.
Take 5-10 sec to find out if they have normal breathing or not. If they don’t, you need help!*
Now that’s all great with someone who is unconscious, but what about the person who could should ‘help me’ when you asked if they were all right? Well you might have some other first aid to do, but at least you know they have an Airway and are Breathing – they need both to talk normally to you.

If they weren’t breathing normally (above) then there would be no oxygen getting to the heart. No oxygen means it won’t be working – so they have no circulation. Start CPR. (Unless you have more advanced training & tools, but we’re not talking about that here!)
If they were breathing normally then you need to assess circulation. You want to know if circulation is normal or if there are problems. Your circulation check should include looking at skin colour (normal? pale? flushed?) and skin temperature. It should be done quickly, preferably with the breathing check. You’ll be able to feel skin temp when you do the head-tilt, chin-lift and you’ll see the skin colour while you’re looking at them. You also want to look for any signs of Deadly Bleeding.
Now we’re at the end of the “Dr. ABC” which is (or should be) taught in every course. These certainly are ‘The ABCs of First Aid’ which everyone who has had first aid training should know. What follows next might (or might not) be new to you, depending on the course you took to become a First Aid Attendant.

If you didn’t already do so, check next for deadly bleeding (sometimes it’s included in the ‘Circulation’ step). This is bleeding so severe that the person’s life is in immediate danger if you don’t deal with it. If deadly bleeding is present, deal with it. Oh don’t worry – you’ll know by the amount of blood spreading around. Be cautious if the casualty is in grass or mud as the blood may be leaking out quickly, but soaking away too.
The ‘D’ also reminds you to consider disability, which is what the casualty might be left with if they have a neck or spinal injury and you’re not careful. Notice that the A, B & C take priority. They have to be alive first, then we worry about disability – but it’s your next priority. Stabilize any head/spinal injuries as your next priority.

OK, so they’re unconscious, but they’re breathing and don’t have a circulatory problem. You’ve also ruled out head & neck injuries. Now you need to find out why they are unconscious. Of course this is a huge topic and well beyond the scope of a single post, but as we get down to the ‘E’ you need to examine the patient and you may need to expose an area. At a basic level of first aid, be most concerned about ‘exposing’ any traumatic chest injuries you find. These are likely to be the most risky for the casualty as they could lead to further breathing & eventually circulatory problems. In fact at least one course goes as far as to tell you not to bother exposing an injury unless it is in the chest area.
If they’re not unconscious, then you should have been able to get here with a few quick questions! Time to expose & examine the injury or problem that has brought them to you – and deal with it.

You’ve done what you can with the patient. Now it’s time to find out anything else (relevant to the problem) that you can. Friends and Family may be a good source of information. They may be able to tell you what happened, or about medical conditions which the person already has, any medication, allergies, when they last ate or drank, if this has happened before, etc. Ask them!

You’ve made sure the situation is safe and that the person has their ABCs. You’ve considered deadly bleeding and the risk of disability. Any injuries have been exposed & examined (and hopefully dealt with). Family or friends have been involved where relevant. Now if you haven’t had to call for emergency help, this is the time they can go to get help, or they may be able to go back to work/play/wherever.
If you liked that, you’ll love this.

Well done. You’ve made it through the ABCs of first aid and the casualty has been dealt with and is gone. Good work! This was only one variation of the ABCs of first aid, so if you’ve heard of others, or think something else could be included, feel free to leave comments below! If you’ve not already done so, you could read the 3 Ps of First Aid next – it ties in well with this post.
*come to class and ask!