Death – it’s not so sudden?

It’s our 100th Blog post! So let’s get back to basics and talk about CPR and preventing death. One of the advantages and disadvantages of working where I do, in a hospital, is that it brings death and dying much closer. Along with that, it brings some interesting stories….
Recently a person in my care was discussing her acute hospital visit and surgery:

“One of the worst things about surviving,” she told me, “is that I’ll have to die again.”

She went on to explain what she’d experienced, the sensation of ‘leaving’ or ‘travelling,’ the warmth, how everything seemed to become lighter, and much more pink. I got the feeling it was comfortable for her. Then don’t you know those pesky surgeons went and saved her life! Now she has to do it all over again!
Somehow, there was time to intervene while she was actively dying, and prevent that (for now). 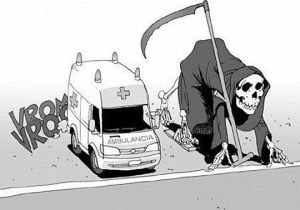 Even more recently, there was an incident in the local ER. A person was brought in by ambulance, with CPR in progress. The hospital staff did everything they could and thought they were going to have to pronounce him dead, yet it seemed he hung on. Every time it was appropriate to stop, there still seemed to be a small sign of life. So they carried on. Now at an average hospital, you may get 15-20 minutes of CPR total. This person got over 45 minutes, and lived, and I’m told is doing just fine.
Interesting – perhaps death isn’t so sudden after all.

So how does this relate to First Aid?

A recent report in The Lancet gives us these numbers:

That means for every 8 patients getting 10 minutes more of CPR, an extra one survived.

First Aid – What we teach about death

In your first aid class, we teach you that without oxygen, the brain begins to die in 4 minutes. By 10 minutes some brain damage is certain – if the person survives. We also say that once you have started CPR you shouldn’t stop (although there are some reasons to stop). So the CPR circulates the oxygen, helping to delay death – it’s not so sudden after all.

Does the First Aid work in real life?

Ask Carol – when she collapsed she was lucky enough to have a neighbour start CPR. She was also lucky both the neighbour and the paramedics were taught to ‘keep going’. It’s not clear, but she certainly got over 30 minutes and possibly as much as 45 minutes of CPR before her heart started again. Read her story here.
Dr Sam Parnia, is the director of resuscitation research at Stony Brook University in New York. He says,

“we now know there are people who have been brought back, three, four, five hours after they’ve died and have led remarkably good quality lives,” and goes on to suggest that death is not so sudden, “Most people regard cardiac arrest as synonymous with death,” he says, “But it is not a final threshold.” He says it is vital that chest compressions occur at the right rate and force and that patients are not over-ventilated.

Of course, there are many people for whom CPR is not appropriate. Still, if more people knew first aid and CPR, and kept going, it’s clear more lives could be saved.
Yes, this is the right moment to book your own learning session…. And possibly one for your neighbour, just in case.