Don’t put it off until later! It is important to have more than one exit from any building and even from every room. Start your drawing of emergency escape routes by drawing a plan of your place. Doesn’t need to be fancy, boxes with room names marked on them are just fine. Next, you can mark the doors for each room. Before you carry on, have a think about (or go look at) each one. Can they open fully if needed? Or do you have, well, years of junk piled up? Make sure you could get out of each if there was an emergency.

Think about routes in and out of the house. Are they also clear and ready for action? Or are you going to be tripping over bicycles and slipping on tools or toys? If there was an emergency at midnight, could you leave the house easily or would you be tripping over stuff in the dark? If you would – deal with it today!
OK next – back to those emergency escape routes. For each room you put on your plan, look for a second exit. Think – “If I was in this room, and the doorway was on fire, how would I get out?” Often it will be through a window. Whatever the exit, mark it on your plan. Now go check that you can actually use the exit in an emergency. Windows open properly? No bars or other security devices stopping you?

A place I work has bars at the windows, but the bars can be swung out of the way in an emergency – the rest of the time a padlock keeps them securely closed. This is great, except that when we did a safety review, no one knew where the key was. Make sure you check these little problems before there is a real need. 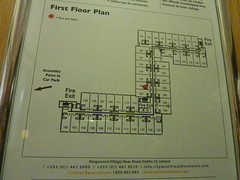 Now you have a plan of the rooms in your house. Exists are marked. Secondary exits are marked for each room. All the exits have been tried and tested. There’s no household clutter blocking your routes. The last thing to do is ‘tidy up’ the plan if needed, and share it with everyone else that lives there. No point having a great plan if no one knows about it.