Sleep Deprivation Causes 6,000 Fatal Car Crashes Per Year: What Can We Do About It?

Would you be shocked if I said that even if you have never gotten behind the wheel of a car after drinking, even if you’ve never had a drink, you still may have driven impaired? It’s called sleep deprived driving and it’s a growing problem on US roads. Don’t be angry, literally almost driver has done it, up to 250,000 people per day according to some studies. But it causes 6,000 deaths per year according to the NHTSA and is a real danger. 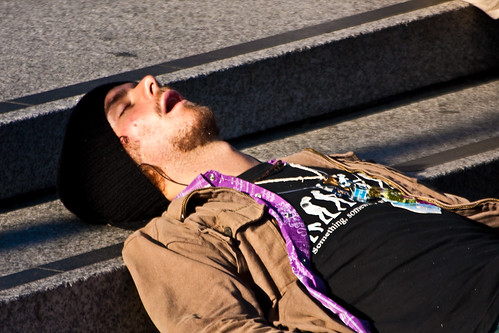 Do we need to address it in the law?
The US population works hard and plays hard. We’re dedicated to family and burn the candle at both ends but our bodies can’t always do what our minds want. We are tired. Combined with distractions like cell phones, passengers and the radio, being tired makes driving treacherous but the real danger comes when drivers are sleep deprived. This condition slows our reactions, causes poor judgement and actually looks a lot like intoxication. In some instances, it can be hard to tell the difference between someone who is drunk and someone suffering from sleep deprivation.
Deprivation can be acute, from staying awake too many hours, or chronic, from too few restful periods of sleep to recharge the body. The average adult needs 7-8 hours of sleeps to restore neural pathways, muscle function and memory but many of us try and get by with less. Several studies have proven the effect of deprivation on the brain, with MRI imaging clearly showing how much harder the brain is working to complete tasks when the subject is deprived. Excessive sleep deprivation can both mimic and lead to psychosis.
Considering how dangerous sleep deprived driving is, it stretches reason that we don’t have a law against it but the problem lies with enforcing that law. Barring a confession, how do you prove, exactly, that someone is sleep deprived? Once a driver is startled by being pulled over and sitting with the window open, all that brain chemistry has changed and there really is no good test for sleep deprivation aside from dragging someone to jail and waiting to see when they drift off. A few states have prosecuted people in fatal accidents caused by sleep deprivation but New Jersey is the only state that has put it on the books. “Maggie’s Law,” passed in 2003, makes it a felony to drive knowing that you’re deprived of sleep.

You should know when you’re impaired
The National Sleep Foundation has established warning signs that a driver is fatigued including head-nodding, lane drifting, turning up the radio, excessing blinking to keep eyes open and rolling down the window. You may think you’ll be okay, but when you become sleep deprived the body simply takes over, falling into micro-sleeps lasting anywhere from a fraction of a second to a minute. The scary thing is you won’t know they’re happening, but obviously the impact can be life-changing if you’re behind the wheel.
The truth is that, like alcohol, we all need to know our limits and pledge to never cross them. Ask for a driver, heed the signs of sleepiness and commit to taking naps. Even a 15 or 20 minute nap on the side of the road can drastically improve reflexes and decision making.
Our author Karen Veazey is a freelance writer for a variety of travel, technology and entertainment websites and one of the only people on earth who enjoys the desert heat. She is currently pursuing an MFA degree in Creative and Professional Writing, focusing on nonfiction. She suggests reading the blog of car accident attorney Jon Remmel if you are interested in ways to remain safe while on the road.